Keep coming back to the heart. Noticing life as I live it.

The Battle of Waterloo

Today was another ‘cultural’ day for the group. We woke up nice and early and headed to the site of the Battle of Waterloo to watch a reenactment. This reenactment is only done once every 3 years and drew a crowd of approximately 55,000 people. This was my first experience riding in a car in Europe. I sat in the backseat of Dr. Brooks’ friend Gret’s car (she is an absolutely marvelous woman, but for some reason she doesn’t think that we can handle the name Gret so she tells us to call her Margaret!). My first awakening was when I started to struggle to extract my seatbelt so that I could put it on. Margaret immediately said, not to worry because no one wore seatbelts in the backseat! Who knew? Anyway, the ride was fun filled to say the least! We made great time through the first part of the trip but were stopped dead before the exit to the Battle site. Here we were treated to more of Margaret’s now notoriously witty comments about Belgium, Belgians and the rest of Europe. Much like in Canada every driver thought that they were more intelligent than the people in the right lane. People were blasting past the stopped line of traffic and then expecting people to let them in as they realized that they had to get over to get to the exit. Margaret had an outraged conversation with herself every time someone tried to cut into the line of cars. Usually this conversation included a good natured assessment of whether the driver was a German, Frenchman, Belgian, Dutchman or something else! My favorite comment after a particularly aggressive driving maneuver was “Oh my God, well of course he would do that, he’s a Frenchman!” The running commentary from Margaret had us all laughing and made the time pass until we finally made it safely through the traffic. 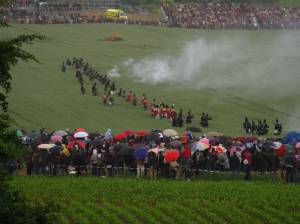 The Battle itself was quite impressive and we had prime seats from the top of hill built to commemorate the soldiers who fought in the Battle. I won’t go into the history of the Battle (mostly because I don’t know it too well…if my grandpa’s set of World Books was here I would look it up in there, but alas it is not) but I will leave you a link here to read up on it if you should be so inclined. The weather, as you can tell by the umbrellas in the picture to the left, was quite dreadful with temperatures in the low teens and misty rain all day. It was, as my mother would say, a “bone chilling” kind of cold. We left the reenactment around 12:30pm and made a far less eventful, but still entertaining drive back to Leuven.

Upon arrival, I spent a short time analyzing my level or exhaustion! I was really tired this morning and kind of felt like I should probably take the opportunity to have a nap. However, my interest in food won out and I decided to go sample some of the baked goods at the Bakeries in Leuven. It may sound strange, but since I arrived in Belgium I have not had a single bit of chocolate and only one waffle. Let me tell you though, that one waffle (purchased from a little store in Leuven) was the most delectable treat one could ask for. I don’t think that I’ll ever be able to eat another waffle without first thinking of this experience. I’m not exactly sure what made it so good (other than the fact that I was eating a Belgian waffle in Belgium) but I think that it had something to do with the crunchy bit of caramelized sugar on the top. I’ll have to try another one and analyze it further…Anyway, despite the fact that I have not eaten Belgian chocolate yet, I decided that I would purchase a small bun-like dessert from the bakery I visited. Inside the bun (it looked more like a pizza pop or panzerotti or something like that) was a filling of fresh cherries. Cherries appear to be a regionally available food in Belgium. At first I didn’t think that I had made the right choice as this dessert was not particularly flashy looking. However, once I tasted it I knew that I had a winner. This was a dessert for someone like my dad, if my sister is reading this she will know the gleam he gets in his eye when he finds a good bun or pastry shop. A good bakery will please Bruce Fearnall any day. I’ve already sent him an email, but I suppose I should take this opportunity to say Happy Father’s Day to him!

Before I went back to the Irish College, I must admit that I stopped by a little sandwich and ice cream store that I had gotten lunch at earlier in the week. The girl that works there was really friendly to me and my friend Aaron when went in there earlier in the week. It’s not as though people here aren’t friendly, they just seem to be more reserved when dealing with us Canadians. I have a feeling that they are secretly just rolling their eyes at us and thinking that we are Americans because we’re so loud, but I suppose I’ll never know! So, this girl had been particularly nice to us, so on my way back from the bakery I may have stopped in and gotten ice cream…What can I say? I had a bit of a craving for sweet stuff, which is a little weird because usually I don’t have much of a sweet tooth. By the way, the ice cream here is way better than at home. Most of it is made right in the show and is far creamier than the stuff we find in Canada. Also, I think this is the kicker, they display it in the most tantalizing fashion. The display it in a normal ice cream case, but they put it in pans so that all you see is this big exciting looking mountain of ice cream. I’ll take a picture sometime I promise. It’s a far superior display method than the deep tubs at home (also probably easier for the workers who have to scoop the ice cream).

After consuming my sweet treats I definitely felt like a nap was in order…So, I napped from about 5:45 until 7:45 (I know, random time right? This shows you how messed up my internal clock is right now!). When I woke up I had another rather random thought…That thought was to go on a run. So, I woke myself up, and headed out. The route that I took today was absolutely stunning. I took a couple of different roads out of Leuven and ended up climbing a fairly substantial hill with farmland all around me. Belgium is quite green in fact and has lots of trees. The scenery so much interested me that I just kind of kept running…When it was all said and done I had run somewhere between 30 and 34 kilometers and for about 2.5 hours. I’m not exactly sure how that happened, but anyway, it did and I’m still alive so it’s all good!

Alright, so I think that’s enough for me for tonight. We get to sleep in a little bit tomorrow because our meetings start an hour later than usual, so I’m looking forward to a solid night’s sleep and perhaps a feeling of being rested in the morning! Wouldn’t that be nice?